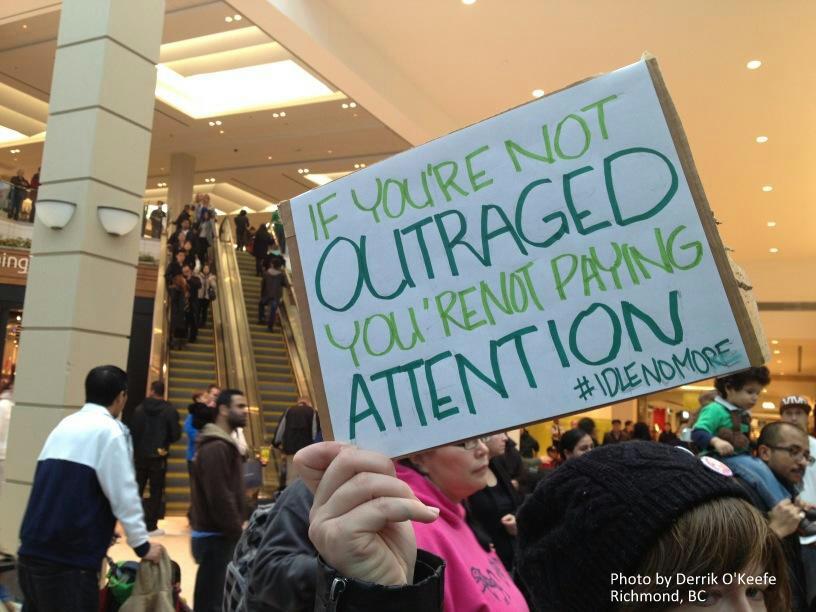 "If you are Not OUTRAGED You are not paying ATTENTION" #idlenomore

I have been watching the social media world closely over the last few weeks and I have to admit there was a period of time where I was confusing the “Idle No More” movement with the Hunger Strike.  It is not difficult to do since both are getting a lot of media attention, however they are different yet linked.

There is a movement happening in Canada: people want to have a voice for responsible and sustainable development and to protect our natural resources.  Our Canadian legislation that was put in place to protect Canadian citizens from our own government decisions on how to develop resources and people want a say on any changes that are planned to be made (i.e. Bill C-45) or ideally left untouched.  The changes made by Stephen Harper’s government over the last 18 months has been drastic – decrease funding to independent decision making bodies for resource development, layoffs of professional scientific employees who review applications for development, layoffs and decrease INAC staff, changes to our Water Act without proper scientific debate, and these are just a few.  All this was done with little understanding or explanation to the people of Canada.  Yes, it is true that the majority of the Canadian or general public do not understand what is going on, however these movements (Idle No More and the Theresa Spence’s hunger strike) are getting people’s attention and questions are being asked.   Remember social movements gave women the vote, abolished slavery….do not ignore or judge social movements for these also gave you the freedoms you enjoy today.

I have found two great interviews that need to be seen by all.  It gives the facts and history of both “Idle No More” and the hunger strike.  This is a social movement for justice and getting a voice.

A CTV News interview with the Chair of Social Justice from Ryerson University (7 mins):

Caption from YouTube: …Times they are a changing and I’m sure that most of you are feeling the movement in one way or another. If you are Native, you are probably on the front lines of this change, even some non Natives are too. If you live elsewhere in the world, you’ve probably not been exposed to the massive transformation taking place in Canada over the past couple of weeks.Human rights are at an all time low over here and a grassroots movement called Idle No More (#idlenomore) has been gaining momentum. I’ve spent a lot of time over the holidays in discussion with Native and Non Native people, either explaining what the movement is all about and what can be done. Everywhere I go these days, it seems like I’m debating or explaining or informing people on the Indigenous/Canadian relationship. Now, I’m not an expert, so I went to the closest expert to me and in an effort to expand awareness and provide insight, I’ve interviewed Russell Diabo, First Nations Policy Analyst. It is a long interview so for those with short attention spans, you can watch it in pieces. For the rest of you, grab a coffee or tea and enjoy. Remember, this is one person’s perspective only. It is intended to continue the conversation and inform those who want to know more. – Jennifer Podemski